Sensei Francis Eng  earned his black belt in Cuong Nhu in August 2003. He is one of the oldest and longest members of Piscataqua Dojo. He received his training with Sensei George Maldonado. He has trained in many events held by Cuong Nhu, Neko Ryu Goshin Jitsu's Camp Budo, various seminars and local tournaments. He Joined Cuong Nhu Oriental Martial Art Association in 1995. He teaches adult classes two nights in Piscataway (Piscataqua Dojo). His goal is to promote peace and health around the world. He also teaches Tai Chi Quan, Chinese kungfu and weapons, a way to improve chronic disease, stay fit and strong and maintain a healthy lifestyle. Sensei Francis (Frank) continues to learn the Chinese art of healing and all style of fighting. Each year he performs and teaches the Chinese cultural Lion Dance at the Chinese Festival. Sensei Frank is presently the head instructor for Cuong Nhu at Piscataqua Dojo taking over duties from Sensei George as of Jan 1, 2008.  He is presently working on his next rank level to Nidan. 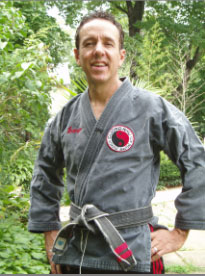 Sensei George Maldonado born in 1954, holds the rank of (Nidan) 2nd degree black belt since 1995 in the Cuong Nhu Martial Arts Association. He studied under the late founder and Grandmaster of Cuong Nhu, O'sensei Ngo Dong, from 1986 to 1999. He continues to study under Professor Ernie Cates and has since 1993. He currently holds the rank of 5th degree (Godan) in Neko Ryu Goshin Jitsu. He has also studied under Master Danny Glover, Master Steve Wolk and countless other instructors. He was the first student to set foot in the Shojin Cuong Nhu dojo  in 1986. In 1994 he started the "Piscataqua Dojo" in Piscataway N J. which he continued as the head instructor until Jan. 1 2008. He is still active teaching and also the liaison between Piscataway Recreation Dept. and the Adult and Children's martial arts program. He is also certified with an extensive background check.
Meet George on Facebook as well -
https://www.facebook.com/george.maldonado.351?ref=ts&fref=ts